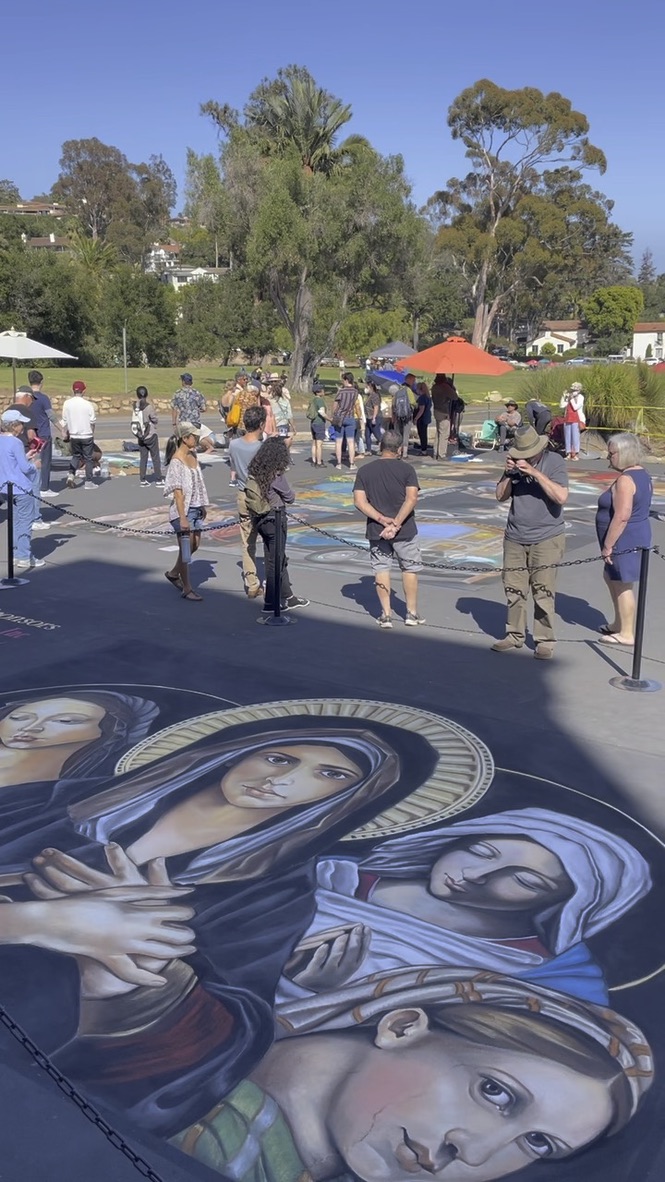 The I Madonnari Italian Street Painting Festival is one of the most colorful and vibrant events in Southern California. Every year, dozens of artists come to Santa Barbara to create massive chalk paintings in the Mission Plaza. The result is always a striking display of artistry that attracts locals and tourists alike.

After a two-year break, Santa Barbara's Old Mission hosted the I Madonnari Italian Street Painting Festival once again. The event is traditionally held during Memorial Day Weekend. The artists transformed the Old Mission's parking lot into a colorful chalk art display that drew hundreds of visitors during the three-day festival. The artists were young and adults, showcasing their works inspired by the Italian Renaissance. This year's festival was extra special because it marked the return of one of Santa Barbara's most beloved community events that were put on hold due to the pandemic.

The festival was founded in 1987 by Kathy Koury, and it has since grown to become one of the largest and most popular street painting festivals in the world. It's always a blast to see the incredible artwork created right in front of the Mission. Artists use chalk to create large and beautiful paintings. The festival was open to the public, and the atmosphere was festive and joyous. It was great to see so many people enjoying the artworks and food and dancing along to the live music played by different bands.

The festival gets its name from the Italian tradition of Madonnari or street painters. Historically, Madonnari were itinerant artists who would travel from town to town, creating religious-themed paintings on church walls and ceilings. Today, the I Madonnari festival pays homage to this rich tradition by bringing local artists and children together. In addition to simply admiring the artwork, visitors can also watch the artists at work and even try their hand at street painting themselves. With its beautiful setting and rich cultural history, the I Madonnari festival is not-to-be-missed.

If you missed this year's festival, be sure to put it on your calendar for next year - you won't regret it!

For any questions related to the local community, dont’ hesitate to reach out!

Based on information from the Santa Barbara MLS as of August 16, 2022. Display of MLS data is usually deemed reliable but is NOT guaranteed accurate by the MLS. Buyers are responsible for verifying the accuracy of all information and should investigate the data themselves or retain appropriate professionals. Information from sources other than the Listing Agent may have been included in the MLS data. Unless otherwise specified in writing, Broker/Agent has not and will not verify any information obtained from other sources. The Broker/Agent providing the information contained herein may or may not have been the Listing and/or Selling Agent.

To continue searching, you must agree to the Terms of Use.

For the best experience, please provide your cell phone number and select accept below to opt-in to our Terms & Conditions and Privacy Policy to begin receiving text and voice communications.

or make a new notebook

Search All Homes and Exclusive Property Listings
(Prices and inventory current as of August 16, 2022)

See local market activity affecting the value of
your home & maximize your investment.

We just need your phone number to finish creating your account.